Use of social media by analysts and analyst relations professionals

I recently had the pleasure of attending an event run by the Institute of Industry Analyst Relations (IIAR) looking at the use of social media by analysts and analyst relations (AR) professionals. As part of this, I sat on a panel with a couple of other analysts – Richard Edwards from Ovum, and Dean Bubley from Disruptive Analysis.

A very good summary of the discussion and output has already been published here, so I won’t go over all of the ground we covered and conclusions we reached. However, there are a couple of points I would like to pick up and elaborate on.

Level and type of social media use within the IT industry

Firstly, as part of the introduction to how we at Freeform Dynamics use social media, I shared some snippets of research from a recent study we had conducted. The key chart here is as follows: 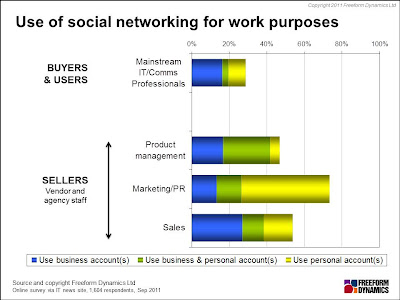 What this picture shows is that those working for suppliers within the tech industry are far more likely to be using social networking than the general population of IT professionals in customer/user organisations. This is something we have known for a while, and it’s why the team here at Freeform tend to think of social media primarily as a way of interacting with industry insiders (which Dean Bubley referred to as the ‘Fourth Estate’). The truth is that we have much more effective ways, not least traditional online media, of reaching the users and buyers that are the main consumers of our advisory output.

The above chart is also useful to help us keep the whole social media discussion in perspective. The data presented was gathered via a web survey so those more inclined to interact online will be over-represented because of self-selection. The 30% penetration of social media is therefore almost certainly inflated, underlining the fact that it hasn’t yet pervaded the work place.

We must also remember that social media is not just one thing. Some people use Facebook professionally, others use it purely for personal reasons or not at all. The same goes for Linkedin, Twitter, Google+, blogs and so on. Furthermore, we cannot assume that all work related use is associated with decision making. Many people simply use Linkedin or Facebook to keep up with the movement of colleagues and peers as their careers progress. So, not only is activity fragmented across media/networks, it varies significantly by type and intensity.

Coming to the second point I want to pick up on, the fragmented nature of social media activity is one of the reasons why AR pros should rethink what they are doing if their use of social mechanisms means they start to cut out more traditional modes of interaction with analysts.

IT vendors and service providers communicate with analysts in a variety of ways, from email and telephone at one end, to face-to-face briefings and conferences at the other. Against the background of cost pressure on AR programmes, a few analysts I spoke with while preparing for the IIAR event expressed concern about traditional communication mechanisms potentially being replaced by social media alternatives – Facebook/Linkedin discussions, spokesperson blogs, Twitter events, and so on.

While there is nothing wrong with using social media like this, indeed some vendors already do some of this stuff, social mechanisms should be exploited in addition to rather than instead of traditional ways of interacting.

That’s not to say that AR professionals can’t spread their time and attention a little differently to embrace social – e.g. if a particular analyst that’s important to you is clearly running their professional life on social media, then by all means use the same media to interact with them – just don’t assume that such a switch will work for the analyst community as a whole, because it won’t. Assuming an analyst will respond to a Twitter direct message, or pointing them to an exec’s blog as a substitute for a proper conversation, represents a significant degradation of interaction.

The old principle of working out the preferred (or most effective) communication mechanism for each individual remains the same when looking at how social media is worked into analyst relations activity, as does that other fundamental principle of remembering the importance of the ’R’ in ’AR’.

The whole debate around how and how much social media should be used by both analysts and AR professionals will no doubt continue, and it will be interesting to see if anyone feels any differently in a year’s time.

Here’s looking forward to the next IIAR debate on the topic.